BID ON THIS LOT

Even the most sophisticated collector would be presented with a most challenging task to definitively explain their primary motive for partaking in our illustrious hobby.

Indeed, a myriad of cardboard enthusiasts relentlessly pursue a specific collecting angle to satisfy their exquisite taste, and while an individual's budget is clearly one of the driving factors, one can surely rationalize a card hobbyist's passion possibly being ignited by the sheer existence of the "Holy Grail" T206 Honus Wagner. 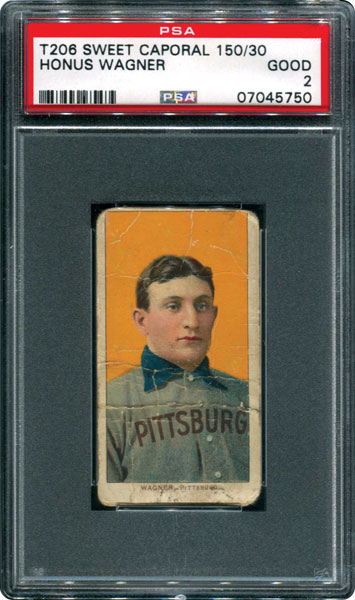 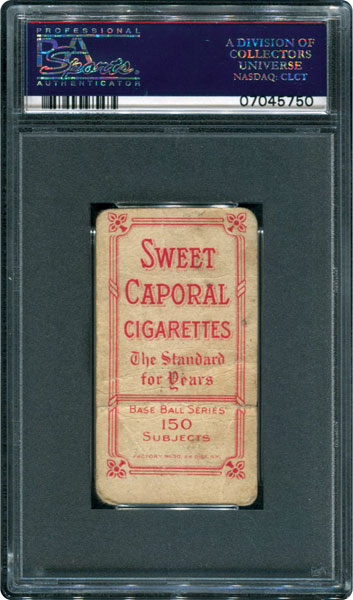 Indeed, while there are a vast number of hallowed keepsakes in the ever-growing card market such as the Baltimore News Ruth, 1952 Topps Mantle, T206 Ty Cobb Tobacco ad-back, Babe Ruth 1916 Rookie, T206 Plank and 1933 Goudey Lajoie (just to mention a few), none of these cards can possibly compete with the esoteric reverence of a T206 Wagner marvel.

This unparalleled tobacco heirloom's stature stands far above any of its brethren, ultimately leading to its rightful designation as the "Holy Grail" of ALL sport cards. One could not possibly fathom that when the great Pittsburgh Pirates shortstop Johannes Peter "Honus" Wagner allegedly instructed the American Tobacco Company (ATC) to withdraw his subject from T206 cigarette production over a century ago, it would eventually lead to the most coveted cardboard memento extant.

One look at this miraculous cigarette artifact conjures up vivid memories of our National Pastime's most treasured moments, and why baseball has withstood the test of time. You can literally hear the music of Jack Norworth's immortal "Take Me Out To The Ballgame" 1908 blockbuster song or recall the poetic justice of Ernest Thayer's timeless ballad "Casey At The Bat". It turns back the clock to an era when Ty Cobb, Christy Mathewson and Wagner himself were paving the way for a simple children's game to ultimately evolve into America's irrefutable National Pastime.

It reminds us of how Babe Ruth and Mickey Mantle tested the limits of any ballpark's furthest confines. It inspires us to reminisce about Joe DiMaggio's legendary 56-game hitting streak or Bobby Thompson's pennant-winning round tripper that sent New York Giants fans into an incredible frenzy.

Yes, the T206 Wagner's imposing Carl Horner portrait image hypothetically links its infinite-like fan base to these and so many more miraculous moments from baseball's unparalleled history. No doubt, its unwavering presence resides as a sheer symbol of baseball treasure, effectively transcending the avid fan through a century of time!

History of the T206 Honus Wagner

The evolution of the immense popularity associated with the T206 Honus Wagner is the sheer foundation of its irrefutable "king of the hill" standing.  While certainly scarce, there are many baseball cards claiming fewer known examples, yet their associated value does not even approach the stratospheric price tags affiliated with the T206 Wagner.

The unbridled desire to capture one of these cardboard gems certainly originates from its celebrated ATC extinction, with a number of dubious tales linked to its early termination.  Allegedly, Honus Wagner's disdain for utilizing his image to promote a tobacco product provoked him to have the card "pulled" from production.

Interestingly enough, Wagner was noted for utilizing tobacco products, and as the story goes, it was his utmost disdain for actually promoting cigarettes to children that prompted him to have the ATC terminate his T206 subject.

The strongest evidence we have relating to Wagner withdrawing his T206 card stems from an article written in the Sporting News Magazine on October 4, 1912, whereby Wagner was sent a letter by a local representative to sign a form providing his consent to be included in the T206 set.

Wagner provided a return letter to the representative stating he did not want his picture to be used in the set, as well as including a $10 check addressed to the representative, John Gruber, to compensate him for the money he would have received had Wagner granted his permission.

Some 43 years later, a similar article in the December 6, 1955 Cleveland Plain Dealer documented the original story, even stating that Gruber never cashed the $10 check, opting to frame it for reasons of historical significance.

Due to Wagner's refusal to sign the permission form, the initial 150 subject printings did not include Wagner (e.g., Sovereign Cigarettes, etc.); yet inexplicably, the ATC decided to use his image in their later issued Sweet Caporal 150 Subjects, Factory 25 issues.

Once Wagner became aware that Sweet Caporal cigarette packs included cards with his image, he immediately instructed the ATC to terminate his T206 subject and this immortal rarity was born.

Interestingly enough, the exact number of known T206 Honus Wagner's remains a somewhat vague issue.  Some say it is approximately 50-60, while others insist it is a figure closer to 70.

The combined SGC and PSA "pop" charts indicate a 46 total, but we surely know with 100% certainty that a number of un-graded/raw T206 Wagner's exist in private collections/museums, etc.

Regardless of the exact count, its supreme hobby status and unlimited investment potential cannot be overstated, for synonymous with the 1952 Topps Mickey Mantle issue, its incomparable mystique will "echo for eternity".

It was roughly five years ago that Memory Lane sold a highly coveted PSA 2 Honus Wagner for $654K in our May 2012 auction. Our esteemed consignor was in the process of building the spectacular T206 set presented in this catalog, choosing this PSA 2 Wagner offering as the major piece to his colossal T206 puzzle. As most enthusiasts are well aware of, locating any T206 Wagner with a "Good/2" technical assessment is no simple chore.

The COMBINED PSA/SGC "pop" lists 46 total examples, of which only 24% carry this challenging grade. While 22% (10 copies) are graded higher, virtually all of these are safely tucked away in private collections, with only 5 of these higher examples surfacing in public auctions in the past 12 years. Equally tough to capture are "Good/2" specimens that likewise have only evidenced 5 meager examples over the past decade.

Dominating the auction circuit are either "Authentic" or "Poor/1" copies, with this PSA 2 Wagner presenting an amazing opportunity for any world-class collector seeking this hallowed gem. Of the 10 higher graded examples, there are six "3's"; one "4"; two 5's (one of which is the famous "Jumbo" Wagner w/a "miscut" qualifier), and the exalted PSA 8 specimen.

While most would agree this offering resides as a "borderline" 'Good/2" example due to its vast creasing, fortunately for collectors, the central Wagner image has retained a majority of its original vibrant hues and portrays vivid resolution.

The hallowed illustration does favor the upper right edges, and the rounded corners do reflect a somewhat eye pleasing uniformity. As previously mentioned, the card includes a significant number of stray creases including a heavy horizontal crease running across the card directly above the "PITTSBURGH" insignia affixed to Wagner's period style Pirates uniform. Yet, the critical aspect remains the "stoic" Wagner pose that serves as the cornerstone image of the card hobby.

The "WAGNER, PITTSBURGH" verbiage along the lower border is still clearly intact with some spotted soiling partly impeding the latter part of the "PITTSBURGH" text. The verso reveals a bold red "SWEET CAPORAL CIGARETTES 150 SUBJECTS, Factory No.30" advertisement, with some scattered areas of toning and creasing the primary surface flaws.

While this card certainly reflects the expected wear of a 108-year old baseball, its unquestionable character and seldom surfacing PSA 2 technical assessment more than supersede its flaws, with the simple "right to own a copy" aspect reigning supreme.

Little did hobbyists realize that when a T206 Wagner sold for $25,000 at a Long Island New York sports card shop in 1985, the Wagner card would embark on an unprecedented journey to the top of the baseball card market. In fact, it is common hobby knowledge that this same card would eventually find itself in a PSA 8 holder, with its last selling price a staggering $2.8 Million!

It is no secret that the hobby is currently realizing stratospheric pricing surges, with many of the premier cardboard keepsakes reflecting amazing pricing point up-ticks and unlimited investment potential. So what does that say for the T206 Wagner that suffices as the hobby's quintessential cardboard issue, and a card whose stature will stand the "test of time"?

As previously stated, since "Good/2" and "VG/3" examples seldom surface for the taking, we have prepared the following two graphs depicting the superb T206 Wagner value increase for these two grades over the past 11 years: 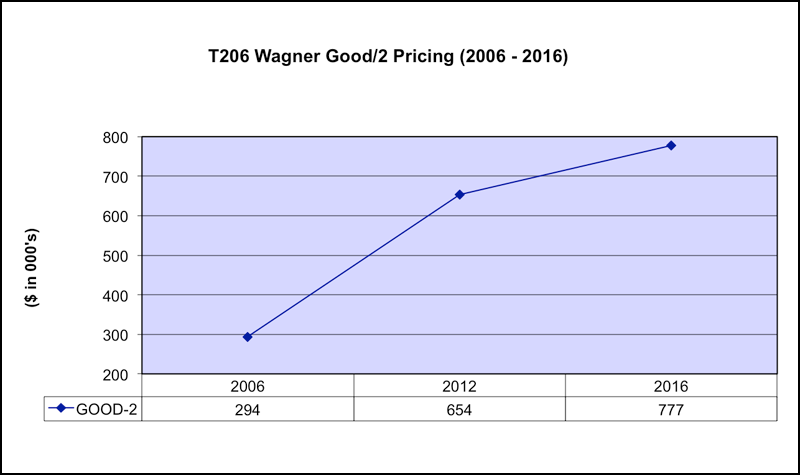 Since public auction sales of "VG" and "Good" examples are few and far between (especially pre-2010), we had to utilize different years for our charts. In fact, the "Good/2" graph clearly shows the scarcity of such sales with only 3 different years posting auction sales (2012 actually realized a second sale, $651K in REA, but we chose to use the $654K Memory Lane sale since it represents the EXACT "Jansen Collection" Wagner offered here). 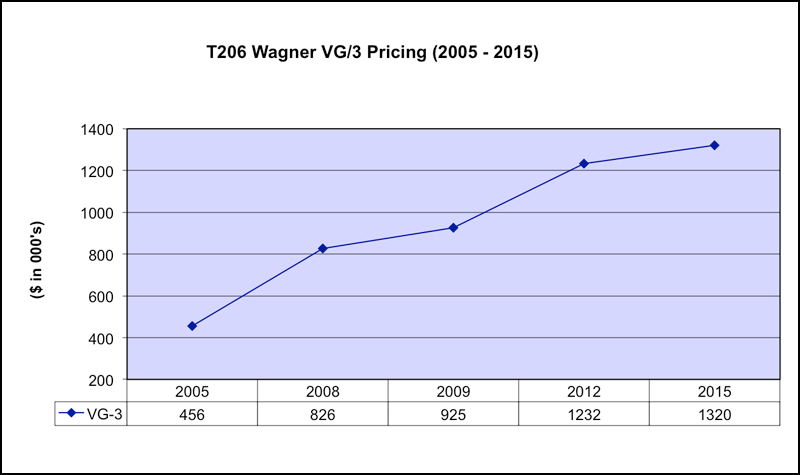 While we can only speculate what the future holds for the sanctified T206 Honus Wagner card, these extraordinary pricing surges coupled with the card market's overall rising prices strongly supports the perception that these tsunami-like value increases will continue over an extended period of time.

Who could have possibly fathomed that a "palm-sized" baseball card included in a cigarette pack would eventually become the uncontested cornerstone of a magnificent hobby.

True, Honus Wagner's standing in our National Pastime's glorious history is forever solidified by his irrefutable status as baseball's greatest shortstop; with baseball writers accurately recognizing this concept when in 1936 they chose the 'Flying Dutchman" as one of their five charter members to enter baseball's illustrious Hall of Fame.

Yet his iconic image on this grandeur offering goes far beyond his diamond achievements, with its immortal reverence elevating the card market to stratospheric heights.

Simply stated, the T206 Honus Wagner miraculously transcends each and every enthusiast back to the "turn of the 20th century" when the concept of a small piece of cardboard fetching millions of dollars was an inconceivable concept.

Yet, over a century of time, not only has the T206 Wagner materialized into the hobby's irrefutable foremost collectible, but has reached a position of world-wide stature with even NON-hobby investors painstakingly pursuing this cardboard icon.

What the aforementioned historical trend substantiates is that the T206 Wagner may not have even touched the "tip of the iceberg" with regard to its seemingly unlimited investment potential.

Safe to say, "it has no boundaries", and while the most sophisticated economists cannot forecast the future with 100% accuracy, this remarkable cardboard heirloom resides as one of the globe's safest assets.

More significant, however, is its irrefutable majesty and momentous standing as the card hobby's undisputable pinnacle memento.

Gazing at this museum worthy masterpiece inspires even the novice collector to yearn for opening a pack of baseball cards or partaking in a sandlot "pick-up" game; enabling us all to crave a marvelous "faith of a child" unquenchable thirst and feel young once again!

BID ON THIS LOT